About one year ago I started and wrote this book! It quickly became my all time favourite and though now I have a new one close to my heart this one still holds a special place to me ;) Finally I've decided to try to rewrite it! Though this will be my first time attempting to rewrite a book! Wish me luck!

Please feel free to comment! Right now I really appreciated a bit more rough criticism since I'm in rewriting mode ;) Also please don't copy! This is my hard work and I put it up here for people to enjoy, not copy. Thank you.

Warning: Blood, dark and intense scenes and romance. I would recommend this for an older audience.(13 and up probably) 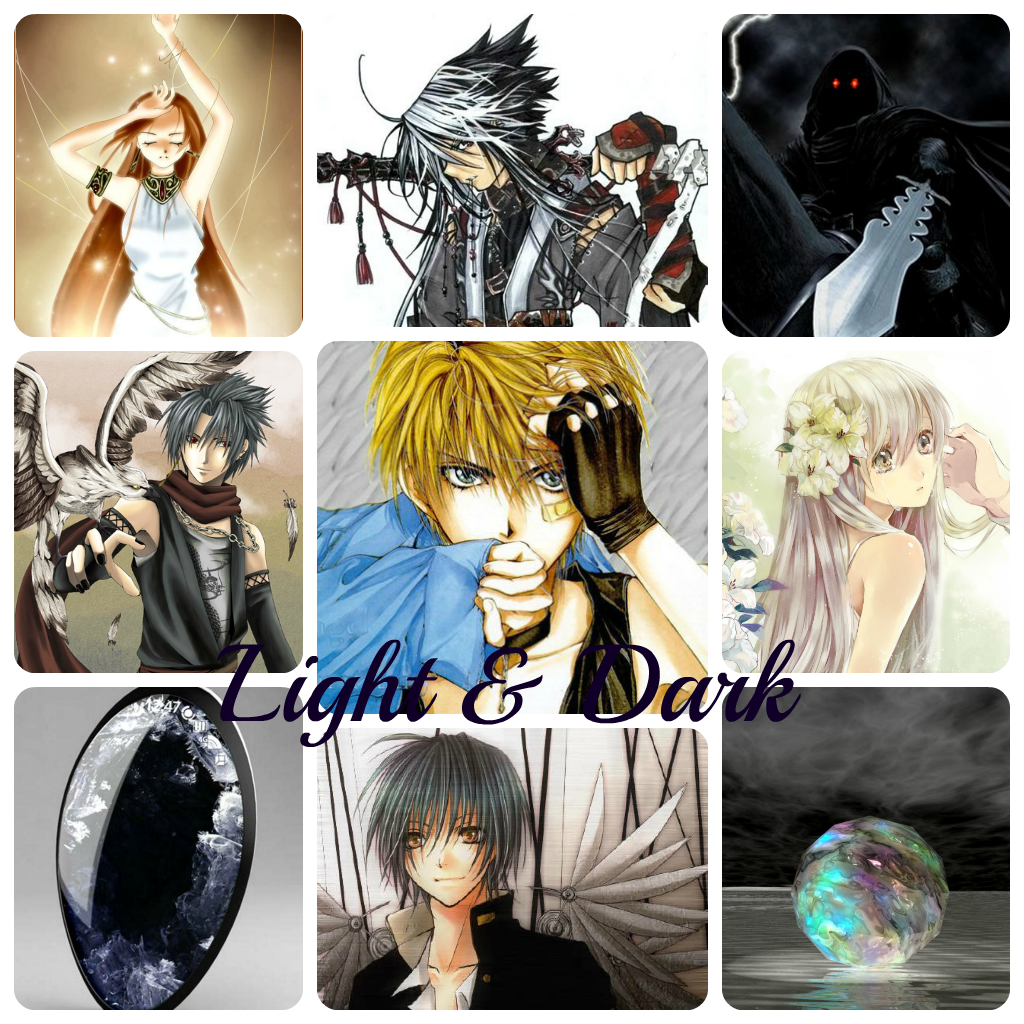 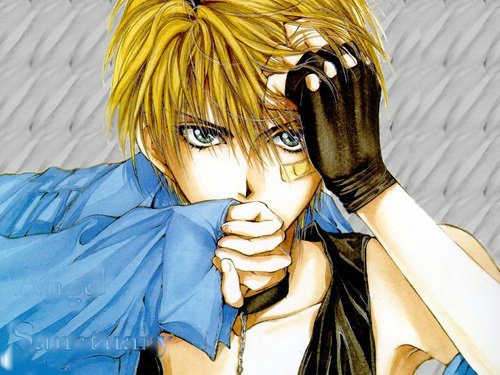 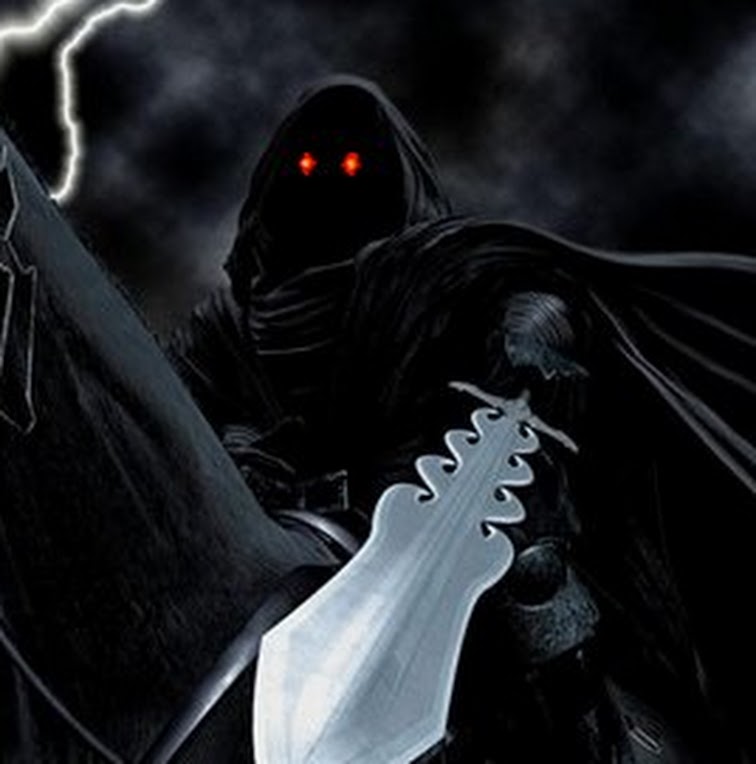 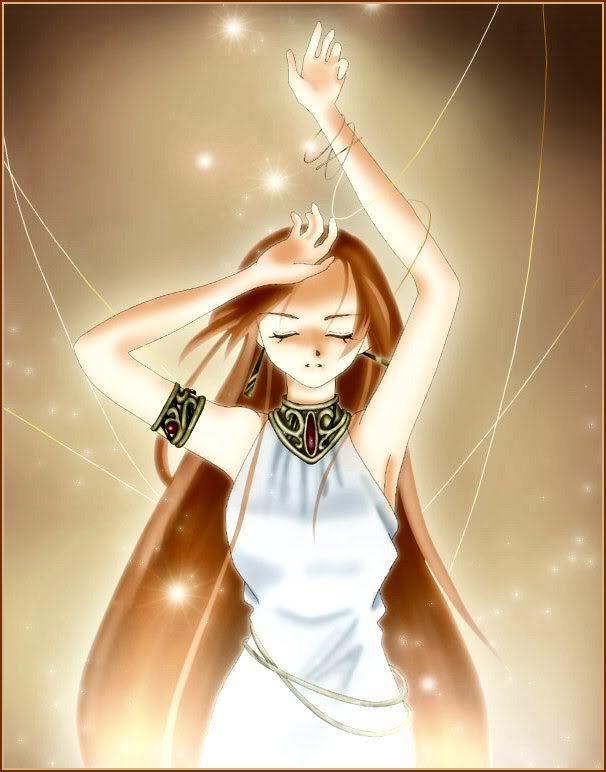 Ah Gomen! I wasn't thinking anyone would spot this... I'm posting it in just a couple moments.

The stars twinkled in dark night sky making the large full moon all the brighter. The moonlight lit up a lovely apple orchard, overgrown and tangled from disuse. Large stone skeletons of towers still surrounded the trees protecting its spoils even in death. Not too far away a large old castle stood, also abandoned.

In the orchard, on her knees, was a lovely young girl looking up to the moon with much sorrow. The wind poured through her hair untying her perfect bun and allowing her amber hair to flow down her shoulders in deep silky waves. A lovely flowing green dress hung off her and sat neatly around her thin bodice. Her dark emerald green eyes were full of tears, but she didn't sob. If fact, she hardly moved at all. Only her slow breathing gave any signs that she was alive. She was rather eerie in the cold dark orchard, adding to the silence.

A loud rustling noise changed that though and a young man stumbled out of the line of hedges into the clearing. He dropped to his hands and knees from weariness sucking in deep breaths from running. Anxiously he looked over his shoulder, his eyes full of caution and perhaps even a sliver of fear. Relaxing a bit he slowly got to his feet still panting and checking over the bushes. He began to scan the rest of his surroundings and jumped when he spotted the young lady. “Oh! Sorry!” He said quickly thinking he must be disturbing her.

She didn’t stir or even react to his sudden entrance.

Plucking up some courage the young man slowly walked over to her. “Are you alright?” He asked running a hand casually through his stark blonde hair, the moonlight hit his silver eyes as he walked out of the shadows and they seemed to glow slightly. He wasn’t particularly tall or anything, but he had a strong build which could clearly be seen from his dark tight leather clothes. His face was sharp and smooth giving him a very handsome air.

The girl still did move at all.

The young man paused wondering if perhaps she was praying. He’d heard of many new religions where people would pray to the moon and offer their souls. It was rather horribly demonic in his mind. Then he noticed the tears and her unblinking eyes. He cocked his head and got closer. Slowly he waved his hand in front of her face, but didn’t get a reaction. Lightly he touched her hand. It was still warm. He looked curious and rather puzzled. "She's alive and breathing, but it's like she not there." He thought to himself. A horrible thought came to mind. “Perhaps she did give up her soul?!”

The young man jumped in surprise and turned quickly. What he saw made him feel even more surprised. A strange being that looked more like an inky black shadow. It seemed to wear a hood and cloak though this was difficult to tell because of how transparent and faded the being was. It was horribly evil though. Bloodlust and darkness radiated off it causing fear to enter the young man’s heart. Its soulless fiery red eyes were the only thing to be seen behind the cloak. This thing was incredibly dangerous; the young man knew this right away.

“W-who are you?” The young man demanded as bravely as his pounding heart would allow.

The shadow laughed in a gargled choking sort of way sending shivers down the young man’s spine. “I am the deepest darkness, your greatest nightmare. I have thousands of names from over thousands of years. The most used though is Black, stealer of souls” it rasped. “But since you’re here you now you know too much. I suppose I should kill you” it hissed.

The young man swallowed, but quickly drew his long silver sword from his left thigh. Sliding his foot back he pointed the sword at Black and got into a defensive position.

“As if that will stop me” It sneered.

Swiftly it charged the young man and parted off part of its shadowy body like a sword slashing it at the young man. Protecting himself, the young man raised his sword to block, but watched as the transparent sword of his assailant went right through his yet slashed deeply into his arm. He howled in pain and jumped back. Quickly the wound began to turn black and fester like poison. It burned like fire and he quickly realized he had to stay away from all the being’s attacks as best as possible. Black attacked again and so he wouldn’t be cut again the young man jumped back. His foot hit a root on the unstable battlefield and he fell over backwards straight into the young lady’s lap. He could feel his face heating up and he quickly scrambled to his feet. His quick movements stirred one of the tears in her eyes and it was released, splashing onto her cheek.

“Oh!” She breathed suddenly as if coming out of a trance. Her eyes widened and her breathing quickened. She looked around in confusion.

The young man couldn’t help but stop and look at her for a couple moments in surprised.

Instantly she spotted Black and gave a gasp of horror. “Get away from Black!” She cried.

The young man turned quickly and found himself face to face with the hideous creature. Well, if it had a face. Swiftly Black slipped through the young man’s body. The young man’s eyes widened with pain and he quickly collapsed to the ground unmoving.

“No!” The girl cried hurriedly getting to her feet. She threw herself over the young man and a bright white light began glowing from her entire body.

Black screeched in pain and backed away shielding its eyes.

Finally she released the young man and he sucked in a breath of sweet air unsure of what had just happened. The deep wound on his arm had also magically healed itself. “Who are these people…?” He thought. He’d heard of magic before and seen bit once or twice, but never anything like this.

The girl got to her feet glaring at Black with a dark hatred. “Go back to the abyss you creature!” She hissed. Her body began glowing again, brighter and brighter.

The glow was warm yet very, very fierce. The young man felt a shiver rush down his spine. She wasn’t someone he wanted to pick a fight with.

Black hissed in pain and covered his eyes trying to hide from the light. Finally he let out an awful wailing screech and rushed out of the orchard.

The light around the girl relaxed until it finally went out. She looked over to the young man. “Are you alright?” She asked.

The young man gave his head a quick shake to clear it and quickly looked up. “Um, sure” He said. He noticed he was trembling though and lifted a shaky hand to examine it. “Why is my body tingling?” He asked cautious.

The young girl sighed and bent down beside him touching his hand and glowing slightly to stop the tingling. “Black was trying to steal your soul” She said.

The young man blinked. “What?” He was now terribly confused and he quickly pulled his hand away. “What are you talking about? What was that thing? Why in the world can you glow? Who in the world are you even?” He asked bursting with questions.

She looked a bit annoyed. “Calm down!” She snapped, but then softened. “Let’s start from the beginning shall we?” She said. “My name is Fay” She introduced.

The young man let out a ragged sigh to calm himself. “Caleb” He said pushing himself to his feet.

Fay smiled. “Nice to meet you” She said politely. “Now, on to the questions…” A shiver tickled her spine. “He’s come back?” She murmured in surprise. She turned quickly. “Black is coming back!” She said.

Caleb quickly swiped his sword off the ground and backed away slowly. Fay followed suit and backed up a bit as well.

Slowly Black shifted out of the shadows and walked slowly over to them.

“Why are you back?” Fay demanded.

Black staggered over to where they formally were and where he had attacked Caleb. Slowly he bent down and picked up a green glowing piece which he quickly hid away. “You both will pay” He hissed. “Trust me you will” With that he finally fully disappeared.

Fay relaxed. “His presence is completely gone…” She still looked slightly stiff though and prepared for another attack.

Caleb slid his sword back into its sheath. “Ok. Now I want to know what’s going on.” He said.

Fay nodded. “I am the bearer of light. I take care of all that is good and the joy in the world. Black is the bearer of darkness, he creates evil in the world. We’re in a constant struggle with each other, hence why he tried to kill me.” She explained.

Caleb looked confused. “So you’ve both got magic powers?” He asked.

He shifted his weight and rubbed his chin. “So… what happened when you were frozen like that and what did he do to me?”

Fay bit her lip. “He sealed off my soul from my body basically…” She said. “He was going to do the same to you…”

Fay brushed some of her long hair over her shoulder. “Yes.” Her eyes narrowed at him. “I prefer you don’t go around telling everyone about us though” She said sharply.

Caleb shrugged. “As you wish malady” He said with a smirk.

Caleb winced. He knew she’d figure out sooner or later. “Listen…” He begun but was slapped sharply across the face.

You'll have to wait until I find time to write a new chapter :P rewriting takes way longer....

So this is a rewrite of your original work?

Yup. Its been a year since I first wrote it now. :P

I think I remember what he did...but my lips are sealed. ;)

It's probably this one ;) I've renamed Kat-a-leen to Fay though.

Permalink Reply by Satar on February 28, 2013 at 9:12pm
I need to read more of it to make sure though :) SO START WRITING AND STOP PROCRASTINATING (All said in Christian love :)