Permalink Reply by Bladebearer on February 18, 2011 at 5:46am
Hang on, I was going over what we have in way of characters. Seems we have two faders and two of earth, i can accept that if you guys don't mind another with your power. all we need is the one of might(who is also suppose to lead the 5 when Marjobelle isn't around).

Name: Tony Drake
Age: 17
Power: Supernatural Strength, Superhuman Precision, Energy Constructs
Personality: Subconciosly Authoritive, Good Natured, Emotionally Disturbed at times
Bio: Raised in a large family as one of the oldest, Tony knows responsibility and really really dislikes it. He has been soul searching throughout his teenage years to find who he is at heart. His search has brought him in touch with a potentially destructive force within his emotions. The one thing that keeps his rage, selfishness, fear, stubborness, depression, apathy, and bitterness in control is his Faith. His Faith has turned his negative emotions into a Righteous Anger, Courage, Will, Hope, Compassion, and Love. The extreme negative emotions still residing in him, he sought a way to expel them through some hobby, but found his resposibilities to make this difficult to do. So a battle raged, like in most people, day in and day out. His unyielding Faith brought Tony to the attention of a power ring seeking a new wearer. It chose Tony, but instead of joining him to the Nexus of Light it brought out the rapid surge of emotions that had been held in check for so long. This rush reprogrammed the ring with the one thing that conqered all the emotions and trascended all understanding, Faith. Tony now bears a greater task, to show the Truth that is the core of his Faith to everyone other soul searching man and woman on the face of the Earth. The problem is...nobody else on Earth can see the ring, him in his uniform, or what he's talking about when he mentions the Truth. The only comfort Tony has is his family, who know only that Tony has a great purpose for his life. They just don't know what...

Description: (With Powers On) 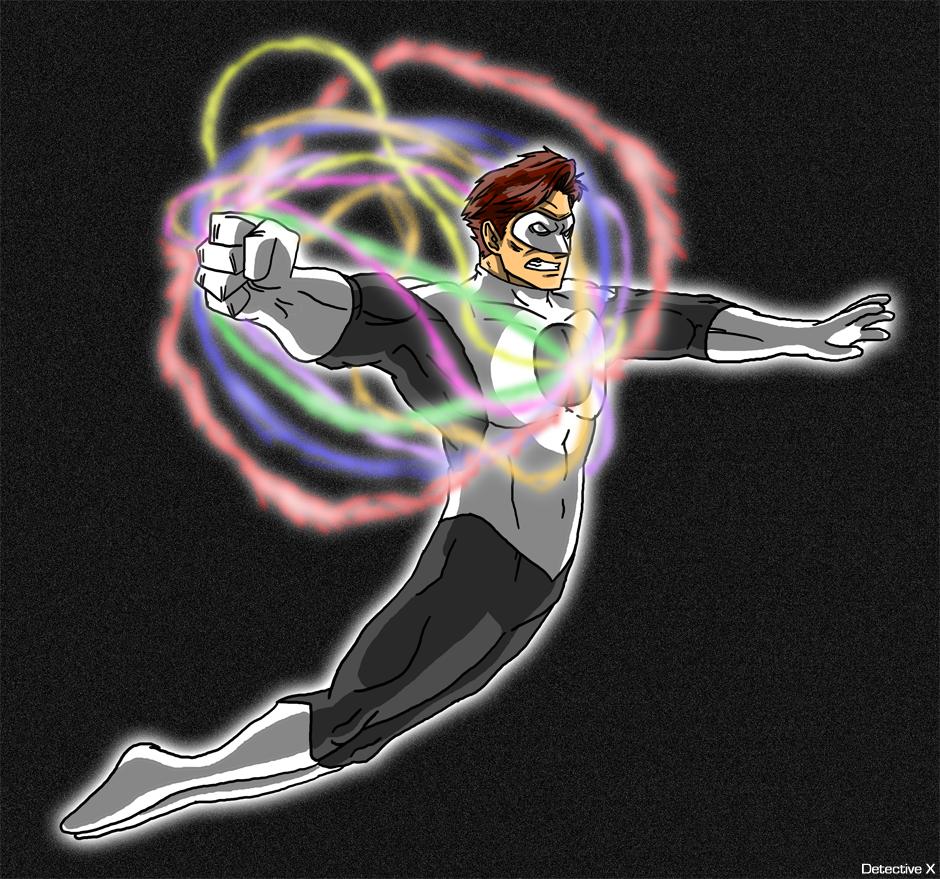 (Ring logo)  Tilt it to the right.

I think we have everybody?!

Are we ready to roll?

The baddies should be on their way to see their boss.

The Good guys should be going about their normal lives. not knowing something special is going to happen.

I (Tony) sit in my Intro to Business class trying to make sense of what I'm hearing. All of a sudden my hand starts to itch, I look down and my skin is bright blue. I whirl my head around to see if anyone is staring and suddenly I'm in the theater. Transformers is playing and I'm sitting in the back with no good view. I stand up to try and get a better view of the movie and my head goes through the roof. I put my hand to my face and find that hand is the size of a Volksagon. I step back, startled, and step on a parking lot full of cars, their alarms blaring. I look up and see choppers overhead, flying motorcycles. i try to warn them away but one flys into me and its driver plummets down. I bend down to try and catch the guy and realise that I've got a lot further to go down than before. I seem to be growing bigger and bigger and bigger. If this keeps up the Earth will...

I wake ﻿up to my alarm clock beeping. This is going to be a long day. I look to the nearly invisible band on my finger, still wondering whether it's there at all. In the last week I stopped a speeding train, created a lug nut gun out of this strange energy, and found a hole in space that only I can see. The hole seems to follow me, always on my right side and always five feet away. Its been helpful for storing my books and stuff but still, things are just wierd lately. I get up and ponder some more while I go through my daily routine. "Good Morning Father, please help me to just get through this day. Amen." I shower, eat breakfast, and brush my teeth, now to wake everyone else up...

hold in space to carry your books?

Permalink Reply by Seeker on February 18, 2011 at 8:43pm
De'clagin and the other two  of The Three walked down the hall to meet their master the one who had summoned them from the great sleep to fight once more. the walked down the hall untill suddenly the one of earth opened his mouth "So why did Queen Saerwen summon you again every body knows that if you want something done you ask me, not some wimp who can't even lift a twig. De'clagin whirled and slammed his arm into the one of earth knocking him into the wall then his hand burst into flame. he pushed his fist toward  his face, but a brick on the wall swung out and knocked his hand out of the way.

Permalink Reply by TTUG on February 19, 2011 at 4:47pm
Yeah, that little hole in space that usually carries the lanterneer's power battery? Well, since his power comes from his Faith, the need to recharge via a battery was uneeded. Plus the battery blew up when the ring got surged.

Permalink Reply by Seeker on February 19, 2011 at 6:25pm
wait what are we talking about, i thought we were writing our own like personal stroy. i do have one question is it posiable for one of the three to become good or on of the five to become bad

Permalink Reply by Bladebearer on February 19, 2011 at 8:05pm
i'd rather you not, but you can if you can't help yourselves.

@Riley Do you mind not putting words in my mouth? :)

Duke Vandeer strides confidently into the Queen's chamber. He is wearing a silk shirt with gold embroidery. With red leggings and silver toed boots. His sword and dagger hang elegantly from his waist. He sniffs when he sees the Elf to his right. Then bows deeply to the Queen.

He kisses her hand.

"What is it you require?"