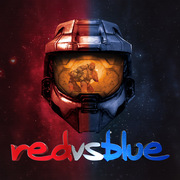 If you're an RvB fan, this is the group for you to connect with other fans!

Red Vs Blue is a machinima/animated series created by Rooster Teeth. From its creation in 2003, it immediately become an online monster hit and is currently in its 13th season with numerous PSAs and mini-series. Find out more about the show and watch the latest episodes at www.roosterteeth.com/show/red-vs-blue. Episodes starting from S13E8 and certain PSAs can be viewed in the highest quality using Google Chrome.

For a better viewing experience and to get started on RvB quickly if you haven't already, go here.

Watch all episodes of RvB14 at roosterteeth.com/show/red-vs-blue

RvB15 will return this spring.

Volume 4 has officially ended. All RWBY episodes, including the new RWBY Chibi spin-off series, can be found at roosterteeth.com/show/rwby.

We will have an official countdown for RWBY Volume 5 when the premiere date is announced.

A sequel has been announced for Lazer Team.

It's a simple game. You can be on Red team or blue Team. Each team has a team captain. You attack each others base with halo weapons. Quote red vs blue as often as you want. The last person standing decides what team wins. Then the next round…Continue

You need to be a member of Red vs Blue to add comments!

Yay! I just hope it doesn't make me cry as much as last season

THX! It's great to be here!

Can't tell you. That would be spoiling.